DPA Mic University presents… CORE by DPA. A powerful new technology at the heart of DPA miniature microphones. CORE minimizes distortion and expands dynamic range significantly. Here they tell us why CORE is important and why it sounds better.

Why is CORE by DPA needed?

DPA Microphones constantly strives to push the boundaries of technology because innovation is at the heart of everything we do. Before CORE, we already produced sonically superior miniature mics but adhering to our  principles,  we developed something that was just a bit better than the best.

In addition, in recent years, we have seen that the entire pro audio sound chain has improved – from the microphone at the beginning all the way to the speakers at the end, innovations in technology means that the sound that reaches the publics ears is generally of a much higher quality. This is due, in large part to the improvements in wireless transmitters and the digitalization of the wireless systems. In fact, today’s high-quality wireless transmitters and receivers are so good they can handle voltages higher than professional microphones can deliver.

Based on these market advancements, DPA decided to innovate our miniature mics so they matched the improvement in the sound chain. CORE by DPA improves how the impedance converter (preamplifier) interprets the miniscule membrane movement within the capsule and electrically converts it into an electrical signal. By enhancing how we interpret the analogue signal we have been able to transform the sound without changing the legacy characteristics of our miniatures.

Why does CORE by DPA sound better?

Dynamic range is the range of sound pressure that a microphone can handle without significant distortion. It is measured from the SPL at the noise floor (the mic’s own self-noise) to the SPL at 1% Total Harmonic Distortion (THD). At 1% THD, most people listening will be able to detect a change in sound quality.

Since 1% THD is the point that most people can hear a deterioration of audio quality, anything that can raise this point improves the quality. This is exactly what CORE by DPA does – minimizes distortion by expanding the range of sound the microphone can comfortably handle.

This gives users more flexibility by expanding the range of sounds that can be captured. In most cases, sound engineers prefer a mic with a wide dynamic range because they can use one mic to capture a wider range of sounds and in more applications. 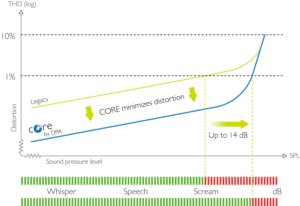 By increasing the dynamic range of the mics, CORE extends the point at which the distortion is audible. In addition, CORE lowers the general distortion heard at all levels – from soft to loud. That means a clearer more open sound across the entire microphone range. A more open and detailed sound has been reported from long-time DPA users. They find that the CORE mics add another layer of quality, which brings their sound to a higher level.

How important is CORE by DPA to the audio chain?

The first step in the audio chain is crucial. It doesn’t matter if you are in a theatre, on a film stage or in the recording studio, if the sound you capture is poor quality, you can’t save it. Each step of the audio chain introduces its own artefacts, which reduces the quality of the sound – this is unavoidable, its physics. Therefore, the higher quality that you start with, even with all of the quality reductions throughout the chain, the higher the sound that comes out at the other end.

If you want to create a great audio experience, you need to start with the best sound coming into the audio chain – and that takes a microphone that can handle whatever you feed into it.

How durable is the CORE by DPA technology?

DPA miniature microphones are used in a wide range of environments, some rougher than others. For this reason, we go a long way to ensure that they have the durability that our users have come to expect. Durability and robustness are inherent in the mechanical design of the mics, which is aimed at minimizing the impact of exposure to heat, cold, tension, water, sweat, and dust, to mention a few.

This durability is achieved through a number of defence mechanisms. Water-repellent nano-coating of the cover and housing, hermetic sealing of the sensitive amplifier at the core of the microphone, and dual gold plating of the diaphragm ensure maximum stability and performance under the toughest environmental conditions.

With the introduction of CORE by DPA technology, DPA’s miniature and sub miniature microphones have been tested* against the international standard IEC 60529:2013 edition 2.2: “Degrees of protection provided by enclosures (IP Code)” resulting in an IP58 rating:

First digit: Solid particle protection = class 5
Ingress of dust does not interfere with the functionality of the microphone and will produce no permanent harmful effects.

Second digit: Liquid ingress protection = class 8
Submersion of the microphone into one meter of water for three hours will produce no permanent harmful effects. Note that the frequency response and sensitivity will be naturally affected by the water during submersion.

All DPA miniature microphones with CORE by DPA technology are IP58 certified.

*The test was carried out by Force Technology, a third party, certified institute in Denmark.

If you’re interested in finding out more about the DPA range of professional Microphones, arrange a demo or email us