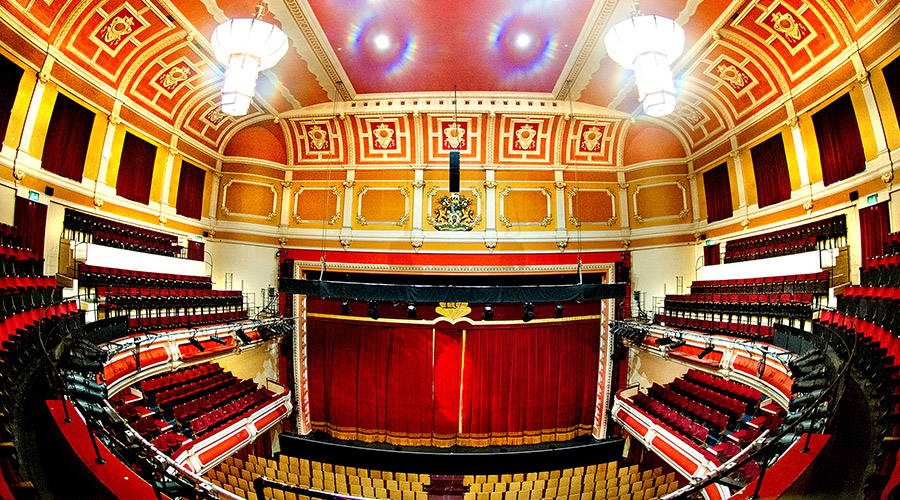 Built in 1901, the 1,512-seater venue provides a sensational theatre experience and caters for everyone; from no-holds-barred rock ‘n’ roll, chart-topping pop, sumptuous ballet and opera, to cutting-edge comedy, fantastic family shows, musicals and not forgetting the annual pantomime!

The theatre was looking to replace its existing PA system, which had been in the venue some 15 to 20 years and was in need of an upgrade. They required something more flexible and modern, like a line array system that would cover all bases, providing clear and articulate vocal reproduction for touring theatre and comedy shows, yet also being more than capable of producing the power needed for a touring rock or pop artist’s concert.

In addition, due to the venue retaining many of its original historic features and being built on a cantilever system with no obstructive pillars, the new PA system had to be as unobtrusive to line of sight as possible, and not be an obviously noticeable large stack of speakers at each side of the stage.

Steve Eaton, Senior Sales Executive in AC-ET’s dedicated Audio division, handled the sale. After visiting the venue for a site evaluation, he worked with NEXO to acoustically model the space using their NS1 system design software, mapping the optimum positions and trajectories for all the necessary speakers to give smooth, even, high clarity coverage, and worked out the best system for the room.

Based on the results, the NEXO GEO M6 high output line array system was specified along with LS18 subs, which delivers an uncompromised full-range sound and NEXO’s legendary performance in a compact design with a subtle visual impact on the stage.

The system comprises of 26 x NEXO GEO M620 line array enclosures. These are flown in six arrays of three, covering the left and right stalls, circle and top balcony, plus a further flown centre cluster of eight units. Four NEXO LS18 subs are mounted under the stage, plus four NEXO ID24 speakers provide stage front fills. These are all powered and processed (EQ & time aligned) through one NEXO NXAMP 4X4 and three NEXO NXAMP4x1 Powered TD controllers. After Steve and the NEXO engineers had re-visited the theatre to commission the system, the resulting sound was accurate to the NS1 simulation, offering stunningly clear and detailed sound reproduction to every seat in the theatre.

The NEXO system is absolutely doing the job I asked. The sound is so 3D and immersive that it brings the audience right in to the action on stage! We are very pleased with the recommendation from A.C., who provided an excellent solution to fit our technical requirements and budget.