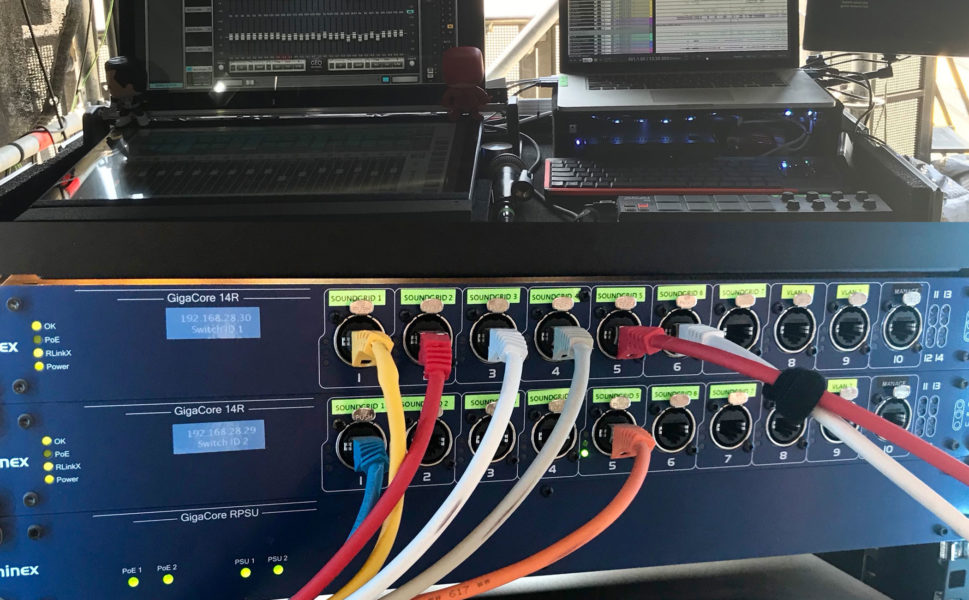 UK – As part of an upgrade programme that has seen FOH engineer Jon Schumann regularly adding upgrades to the touring Waves SoundGrid LV-1 rig that he has designed, the MØ FOH engineer has recently upgraded their network infrastructure with the addition of a new Luminex based Fibre backbone for their fully featured LV-1 system.

Jon and the MØ guys are so progressive in their attitude towards system design, that after some successful tests they were willing to move their system forward with the addition of Luminex GigaCore switches. They were looking for a top quality solution, and were willing to invest in what is an essential part of their impressive audio system.” He continues: “It has been a pleasure to work with such forward thinking clients, and I think I have learned as much as they have.

Whilst the Danish Pop Star has been steadily amassing an increased following, her FOH engineer has been amassing an increasingly impressive audio system for touring. Rather than going down the route of a rented touring system, MØ have chosen to purchase most of their touring Rig and build a flyable system that can accompany them to every gig.

The addition of the 4 Luminex GigaCore 14R switches, along with the two redundant PSUs that provide full power redundancy at each end of the wire for both sets of switches, has added the Rosetta stone to an already advanced system design.

The Luminex switches, supplied via fac365 through the brand’s UK & Eire distributor, A.C. Entertainment Technologies Ltd. (AC-ET) have helped elevate the system to a level of redundancy that has arguably not previously graced the touring market, and set a new benchmark for what is considered a redundant system.

Jon first started to look at Network switches that could provide the extra level of facilities and redundancy to complement the system he has already put in place. So after consulting with Alex at fac365 and following a successful demo, plus the switches being ratified by Waves as qualified for use with SoundGrid, Jon took the plunge and added the switches as the backbone of their system.

They are not only easy to set up and control, they also offer the ability to switch between Fibre and Cat5/6 seamlessly on a daily basis, along with extra features like redundant links and aggregate links for achieving higher bandwidth between network switches.

Alex Hadjigeorgiou from fac365, who provided the initial consultancy, added: “Jon and the MØ guys are so progressive in their attitude towards system design, that after some successful tests they were willing to move their system forward with the addition of Luminex GigaCore switches. They were looking for a top quality solution, and were willing to invest in what is an essential part of their impressive audio system.” He continues: “It has been a pleasure to work with such forward thinking clients, and I think I have learned as much as they have.”

Building upon their already strong support for popular network audio protocols, the approval of Luminex switches for use on the SoundGrid system heralds a new chapter for Luminex, where their products have the potential to be as ubiquitous in sound as they currently are in lighting.