UK – The Manchester home of !Audacious Church has benefited from the installation of 34 Chroma-Q Inspire RGBW LED house lights, supplied by A.C. Entertainment Technologies (AC-ET). The new fixtures were delivered and installed by Manchester-based lighting consultant, Urban Lites, after the church’s management decided to upgrade its flagship venue’s auditorium with a higher quality, more consistent and reliable lighting solution.

Founded in 2007, !Audacious Church has grown to the stage where its 1,400-capacity location in Salford regularly attracts a full house for each of its three scheduled Sunday services. With an ageing, failing house lighting system of early-generation LED fixtures limiting the venue’s potential, the management put the upgrade requirements out to tender.

Mark Steele, operations manager at !Audacious Church, says, “We wanted a better light, a better coverage to give us more usability for the venue. There just weren’t enough fixtures before, and some of those were becoming unreliable.”

The tender was won by Urban Lites, which had previously provided the church’s theatrical stage lighting rig and knew the auditorium well. Following discussion with their regular equipment supplier AC-ET, Urban Lites suggested a choice of solutions to the client. A demonstration was arranged by AC-ET’s Ben Steppenbeck, and the Chroma-Q Inspire fixtures were chosen.

“It was all very smooth, very helpful,” says Steele of the demo and the specification process. “They were able to give us 3D previsualisation models, so we could see exactly what coverage we could expect. On the 3D model, most beams across the roof had seven fixtures, but on one of them they had only put four. When we questioned this, they said the model showed that four would work – and they were right. If they’d added another three fixtures, we’d never have questioned it!”

With approval of the previsualisation, Urban Lites successfully installed the 34 wide beam angle Inspire luminaires during a five-day window between services. “They were very happy with the result,” says Walker. “The Inspire is a great product for this type of space. Its theatrical grade dimming and silent, convection-cooled design makes it especially attractive for auditorium environments.” 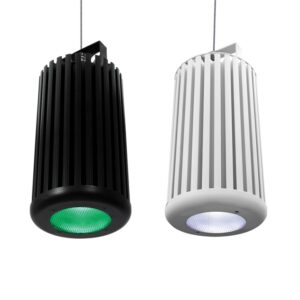 The Chroma-Q Inspire RGBW LED house light fixtures offer an elegant and energy-efficient lighting solution. Available with a black or silver body, the fixture contains a single, high output LED source and a homogenising lens to generate a smooth, even light field, free from hot-spots and the tell-tale artefacts often seen with LED. Its four-colour engine produces bold saturates and subtle pastels with ease, while the adjustable colour temperature from 1,000-10,000K and choice of models offering narrow, medium or wide beam angle gives additional flexibility.

“The Inspire fixtures just looked really clean and classic,” says Steele. “And our auditorium is mostly black, so the black fixtures are well hidden. We’ve now got much better light, with less visual intrusion.”

Walker concludes, “It’s been a real success, thanks to AC-ET. They have been our go-to supplier for the past 15 years, ever since we started the business. They were a great help, as always!”

All images courtesy of © !Audacious Church