A.C. Goes Back to its Roots for Friars Aylesbury’s Stunning Sculpture of David Bowie in Aylesbury Market Square 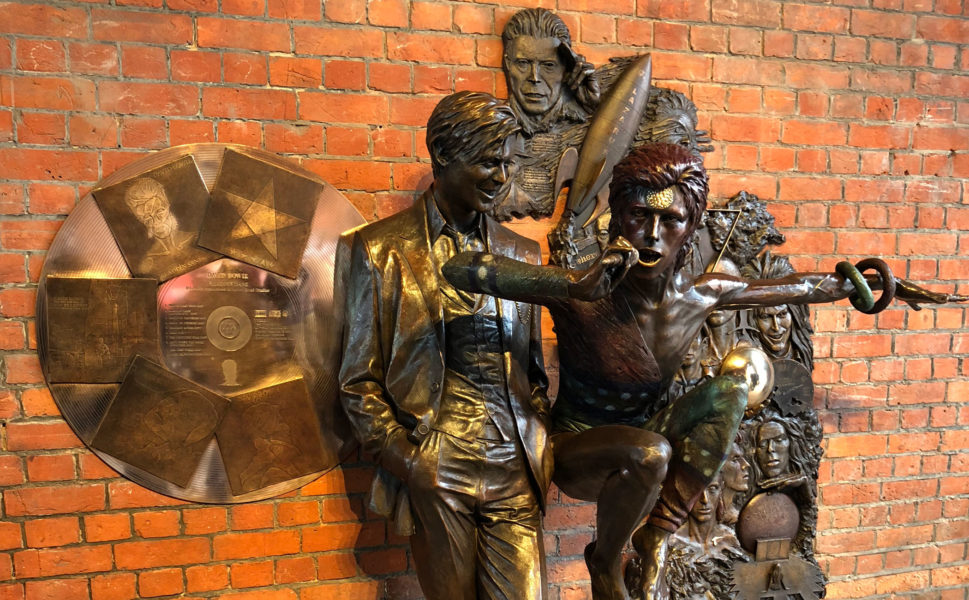 A.C. Goes Back to its Roots for Friars Aylesbury’s Stunning Sculpture of David Bowie in Aylesbury Market Square

UK – A.C. Entertainment Technologies Ltd (AC-ET) went back to its roots to support the town of Aylesbury and its legendary Friars music club with their David Bowie statue in the local Market Square, created as a permanent tribute to the location of his legendary 1970s live performances at the club.

Designed by Andrew Sinclair for Friars Aylesbury Community Projects, to celebrate David Bowie’s music and local legacy in a permanent way, ‘Earthly Messenger’ features Bowie as Ziggy Stardust and other characters from his career. A Bowie track is played at random on the hour every hour above the statue.

David Stopps, music promoter for the Friars Aylesbury club – which today hosts events at The Waterside Theatre in Aylesbury – directed the sculpture project with his wife, Sue.

The club has a very special connection with David Bowie, having hosted the worldwide debut live performances of his seminal ‘Hunky Dory’ and ‘The Rise and Fall of Ziggy Stardust and The Spiders from Mars’ albums at its former Borough Assembly Hall location in Market Square, Aylesbury during 1971 and 1972. As well as playing Friars five times, Bowie formed the Spiders from Mars in the club’s dressing room and referenced Aylesbury Market Square in the first line of ‘Five Years’ from the Ziggy album – ‘Pushing through the Market Square, so many mothers sighing…’.

Friars Aylesbury is also acknowledged as having played a role in the successful careers of such iconic British artists as Genesis, The Jam, The Clash, The Ramones and U2 to name just a few – as well as being a large contributor to the success of the original A.C. business in the 1970s. Known then as the Alpha Centauri Light Show / AC Lights, it provided the resident psychedelic light show for DJ support acts to the live music artists – including on the night of David Bowie’s performance on 29th January 1972.

Friars Aylesbury and David Stopps gave A.C. the opportunity to network with the bands who performed there and their managers, leading to work with these bands on their subsequent tours.

40 years later, David Stopps contacted David Leggett, co-founder of A.C. and now Executive Chairman of A.C. Entertainment Technologies (AC-ET) as the company is known today, to see if it could donate and install a lighting system to permanently illuminate Earthly Messenger – the world’s first statue of David Bowie.

David and AC-ET were keen to be involved in the project, to give something back to the Friars club and to the town of Aylesbury as acknowledgement of how important they were to A.C. in its early years.

A.C. Lighting’ and Friars Aylesbury have a long and glorious history together going right back to the early seventies. We are extremely grateful to David Leggett and A.C. Special Projects for their enthusiastic support for this mammoth two-year project. The state of the art permanent lighting they have installed has made a huge difference to the presentation of this stunning sculpture. We recommend people come and see Earthly Messenger after dark to get the full impact of the lighting installation, which makes the sculpture shine like a star. 2019 will be the 50th Anniversary of Friars Aylesbury and we look forward to more collaboration with A.C. Lighting to celebrate that milestone.

It’s been a pleasure to be involved in this project. When I had the pleasure of working with David Stopps in the 1970s, he had a real talent for spotting up and coming artists, which often broke after playing at the Friars club. Like many artists who performed there, A.C. owes a debt to David, Friars and the town of Aylesbury for the support and opportunities they gave us in our early careers. Their place in the rich musical legacy of David Bowie and so many other iconic artists of the British live music scene is very well deserved. The statue is a wonderful monument to this history, and will no doubt become a pilgrimage to fans of David Bowie from all over the world.

Today, A.C. Entertainment Technologies is one of Europe’s largest distributors of cutting edge professional lighting, sound, video and rigging equipment to the performance, film, TV and corporate markets, to name just a few. In addition to its UK head office in High Wycombe – which is also home to A.C. Special Projects – AC-ET has a Northern UK sales office in Leeds and sister companies in London, Manchester, Ireland, France, North America and Japan. The international “A.C. Group” of companies employs nearly 300 people worldwide and has an annual turnover of approximately £100 million.