DPA – How To Mic A Kick Drum

How To Mic A Kick Drum by the DPA Mic University. This article will give you some information about the kick (bass) drum as well as guidelines on close miking the instrument and suitable placement options. Please remember, great sound is subjective. The miking methods described in this article are suggestions only. Try these methods out, but make sure to listen and choose the best solution for your specific situation.

DPA – How to mic a kick drum

An instrument’s sound is usually designed to be experienced at a distance so that all the different elements of the sound are naturally blended into a perfect harmony. Yet often, mounting a microphone directly on the instrument is the most practical solution. Close miking an instrument is often considered to be a compromise to the instrument’s true acoustic sound.

Finding and placing the microphone in the instrument’s sweet spot – or your preferred location – can be a challenge.

The kick drum as an instrument

The kick drum is the largest sound source of the entire drum kit and the one with the lowest frequencies. Its sound differs a lot depending on the drummer’s choice of size, heads, tuning, muffling and whether there is a hole in the resonator head or not.

A jazz drummer will typically use a smaller sized drum (down to 18″ or less), thin heads and high-pitch tuning. In addition, a jazz kick drum often does not have a hole in the resonator head making it necessary to place a mic outside, leading to a more round, mid-range heavy sound. Alternatively, the mic can be placed facing the beater head for more attack.

In contrast, the standard rock kick drum has a 22″ diameter (often up 24″ to 26″) and a hole in the resonator head. The typical rock drummer uses a thick batter head or even a 2-ply head and tunes it very low, to gain maximum attack and low end. Since there is a hole, a mic can be placed inside to get more attack when the beater hits the batter head.

Occasionally, the drum will not have a hole in the resonator head, which results in even more low end. In this case, a mic can be permanently installed inside the kick drum or the drum can be miked from the outside, which results in less attack.

A drum kit can produce very high peak sound levels. It is not unusual to see levels in excess 156 dB or more at close range. Whatever type of mic is used, it must be able to manage these levels without clipping. 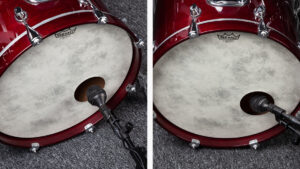 The kick drum is a large instrument and offers many placement options on and around it so mic placement is very flexible, and the mic can be angled to give the attack or the low end you are looking for.

Sometimes placing a kick drum mic just outside the drum, on the edge of the resonator head, gives more impact. Just note, that a lot of air is moved by the kick drum and when it is compressed through the hole in the resonator head, the mic can sometimes pick up wind/pop noise. Usually this can be dealt with by simply adjusting the angle of the microphone in the hole.

When close miking, the resonator head acts as a point source. This does not affect the sound when using omnidirectional mics but when using directional mics, proximity effect will lead to an increase in low frequency (bass) response as you move the mic closer to the source. Furthermore, if the resonator head is tuned very low, it may also influence the low frequencies if the microphone is angled and pointing at the edge of the hole.

To counter this, and get a punchier sound, the microphone can be placed inside the drum. The sound pressure level is not as high inside as it is just outside the hole so this position may result in a thinner sound (fewer low frequencies), sounding more natural and flatter. But kick drums vary so there are lots of exceptions to the rules.

To pick up a more natural sound that incorporates the entire drum kit together with the ambient sounds of the room, a stereo kit of omnidirectional microphones placed approximately 1 meter in front of the kit, low, in front of the kick drum is a fantastic alternative.

There are many ways to mic a kick drum. In the end, it all depends on the instrument, the drummer and the sound you wish to produce.

DPA’s solutions for the kick drum

If you’re interested in finding out more about the DPA range of professional microphones, arrange a demo or email us