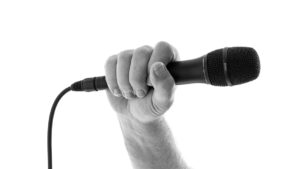 When microphone measurements are carried out in the lab, all obstacles that may disturb the sound field around the microphone are removed. This goes for most microphone data like directional characteristics and frequency response. The microphone may even be suspended by thin wires to ensure that the influence of a mic stand is avoided.

The documentation obtained in the lab is fine for studio microphones intended for orchestral recordings in concert halls, large studios and similar spaces. For those applications, the microphones are placed in a – more or less – undisturbed sound field.

When it comes to handheld microphones, the situation is completely different. You can grip a microphone in many ways. You can hold around the handle (hence the name “handle”) or you can grab it around the grid – or any position in between.

However, the hand is not the only influencing obstacle; the singer’s head is also very close to the microphone. Both the hands and head affect the sound field. The microphone design, coupled with the way it is used, determines how much the sound of the microphone will be influenced.

If you hold the microphone by the handle, very little coloration, or change of acoustic stability, should occur (even though it does happen for some microphones). However, if you hold one or both hands around the microphone head – known as “cupping” – changes happen. In connection with PA systems, there is an increased risk of acoustic feedback and uncontrolled coloration of the sound.

Here are some examples of how different hand positions introduce deviations to the specified frequency response. The measurements are done using natural voice. The microphone is addressed on axis at a distance of 10-12 cm (4-5 in).

We measured three subjects, each holding the microphone in the left hand and then switching it to the right hand. The red curve is the averaged result of all six measurements. A straight line shows an undisturbed frequency response.

Holding the microphone at the end of the handle creates only minimal of deviations from the nominal response (ripple above approximately 3 kHz). These ripples are generally not audible.

Holding the microphone at the top of the handle, just beneath the mic head, gives the ripple a somewhat higher amplitude compared to the low position. It may be audible, however still only to a minor degree.

Cupping with the index finger and the thumb flush with the front of the microphone creates resonances. The main resonance is, in one case, in the range of +9 dB @ 1.8-2.2 kHz. Another resonance is found around 10 kHz. This resonance is audible (colouring the audio) and is a source of acoustic feedback in the PA system.

This is a typical position – the hand covers half the grid and the thumb is laid over the top. The major resonance is found at around 2 kHz (low Q) and again above 6 kHz.

Cavities near the microphone, including the singer’s mouth, can also create resonances. A wide-open mouth in front of the microphone is a huge cavity, which can influence the performance of that microphone.

The primary way to avoid problems is to hold the microphone on the handle not around the microphone grid. (Beatboxers should disregard this suggestion since resonances are an integral part of the sound design.) In addition, remember that the membrane of most directional microphones is exposed to sound from both the front and the rear. It is a delicate balance between the two parts of sound and this balance can easily be tilted, which may change the directivity of the microphone.

The DPA Handheld Microphones bring true studio sound to the live stage and recording studio. These mics are available in an extremely linear version as well as in a version with a high-end boost. This directional characteristic offers the best of two worlds — from cardioid and super cardioid patterns. The modular nature of the d:facto™ Series allows you to switch the capsule as well as the adapter, making it the most flexible vocal microphone available on the market. 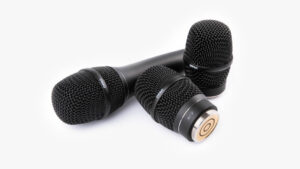 The 2028 Vocal Microphone is designed for the unique challenges of live stage performances. It is a flexible handheld vocal mic, which provides transparent, fantastic vocals to performers from a wide range of markets including live, HoW, broadcast, etc. Use it wired or together with your favourite wireless system, either way, just plug it in and hear the vocals shine like never before.

If you’re interested in finding out more about the DPA range of professional Microphones, arrange a demo or email us